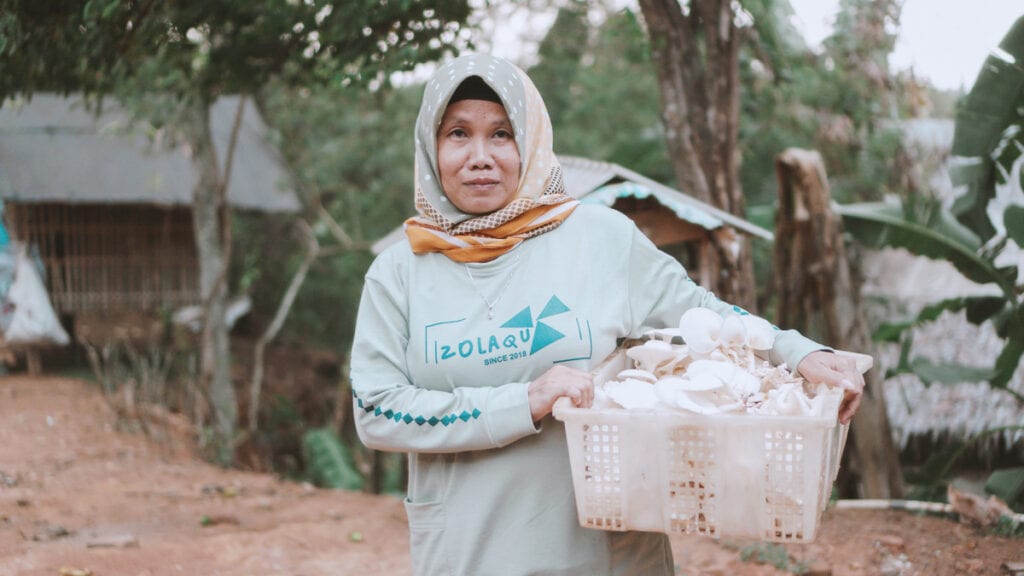 Amartha – Bridging the financing gap for women entrepreneurs in Indonesia

Indonesia has more than 22 million female entrepreneurs, but most of them face significant difficulties in accessing financial services. In the country, only 49% of the population owns an account at a financial institution or with a mobile money service provider, according to the World Bank. In rural areas, most of the population is underserved by traditional banking services. Amartha’s business model is a strong example of the potential of technology as an enabler of financial inclusion for women.

Through an innovative peer-to-peer lending platform, Amartha connects female entrepreneurs in rural areas facing difficulties in obtaining working capital, to a network of online lenders interested in making profitable, impactful investments. The platform includes a self-learning algorithm which determines the risk level of borrowers without prior credit history, and automates key aspects of operations, including application process, data gathering, credit decision making and scoring, thus lowering operating costs. It also creates a credit history for the borrowers for future funding requests to banks or other financial institutions.

But reaching the most underserved female entrepreneurs in remote villages requires more than technology, which is why Amartha’s business model also relies on a strong network of field agents who bring the company’s technology where the needs are most acute. Amartha’s Android-based mobile application helps the field team perform servicing and manage the group of borrowers. Aria Widyanto, Chief Risk & Sustainability Officer of Amartha, names it “technology with human touch”. “Amartha’s mission could not be fully fulfilled if we were to focus only on people who have a smartphone and internet access. We need to ensure that we are not leaving behind those in remote areas. The role of our
business partners is to bring the offline community into our digital platform, bridging the disparity,” says Aria.

Founded in 2010 by Indonesian entrepreneur Andi Taufan Garuda Putra, Amartha started as a microfinance institution before pivoting into a fintech peer-to-peer lending model in 2016. With more than half of Indonesia’s poor population being located in Java island, the company started its operations in Java, with a focus on villages without access to banking services. Amartha now operates in more than 3,500 villages in 36 regions of the island.

One of the strengths of Amartha’s model lies in its holistic approach to poverty alleviation. “Education is
key”, says Aria. “This is at the center of our model and one of the reasons why our default rates stay below 1%.” Most of Amartha’s borrowers are unbanked women aged between 35 and 54 years, with a low level of education. Half of them went to primary school, one in five have a high school diploma, and less than 2% have ever attended college. Every week, each business partner holds a group meeting with 15 to 25 women from the same neighborhood to perform loan disbursement and collection in cash. They also take this opportunity to deliver educational content related to financial literacy and entrepreneurship. “We provide education programs around three pillars: financial literacy sessions that are mandatory for our borrowers, entrepreneurship training to help them improve the management of their business and take good decisions when they earn additional income, as well as health and hygiene programs.”

According to the World Bank’s Multidimensional Povert Index, health deprivations make up the greatest contribution to poverty in Indonesia in 2018. “Most of the household expenses are for education and health issues. Sometimes the children get sick because of a lack of hygiene at home. We have developed education contents to promote good practices for hygiene and water sanitation. We also perform health-checks and we implement social programs designed according to need analysis. For us it is risk mitigation, but most of all it is part of our approach to addressing the various factors that keep women in poverty,” says Aria.

Working in partnerships is another strong asset of Amartha. The medical check-ups are led by CIMSA volunteer doctors and eye examinations by ophthalmologists from NVG Essilor. From the eye examinations, thousands of pairs of free glasses have been distributed to improve productivity of the borrowers. Based on a survey led by the Amartha, 33% of women who received glasses experienced a productivity increase of four hours per day and 67% experienced one hour of additional productivity. Other social programs and learning modules have been developed in partnership with universities, international organization and the private sector, to address the needs observed on the ground. Organisations that have worked with Amartha include UNCDP, UN Women, and the World Bank.

Since 2016, the percentage of Amartha’s borrowers below the national poverty line dropped from 63% to 31% while the proportion at country level fell from 10.7% to 9.6% over the same period.

More information about Amartha and the impact of other Bamboo’s investees in our Impact Report.